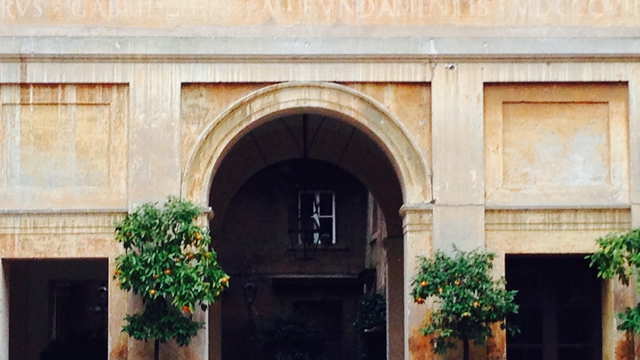 Potted clementine trees and a Roman arch greet visitors to the main entrance of the Palazzo Taverna. This palace houses the University of Arkansas Rome Center

In 1989 the University of Arkansas opened the doors to its Rome Center, a semester-long study abroad program with about a dozen architecture students. The venture was successful, according to Director and native Roman, Dr. Davide Vitali, but not yet reaching its full potential, namely having other universities participate. Eleven years later, in 2000, Auburn University began regularly sending students and faculty, and the course offerings expanded to include graphic design, art and fashion.

Today, the Rome Center is located in the Palazzo Taverna, one of the hardest buildings to access in the city. It’s a palace that once served as the site of the French Embassy. Students and faculty are housed in apartment-style buildings in quaint Roman neighborhoods not far from the Palazzo.

Participating SEC universities now include Louisiana State University and the University of Tennessee. Also, students can now take Italian language courses. Approximately 100 SEC students study at the Center each year, and we had the good fortune to meet a few Razorbacks, Tigers and Volunteers during our morning visit.

Although it poses a logistical challenge, in an on-going effort to encourage cultural diversity, classes are often a mix of students from different universities, and there are workshops with Italian institutions.

Arkansas continues to focus on the future. Plans are underway to once again expand available courses to other disciplines and to welcome additional SEC universities. To me, if a few other universities join the Center, I saw a room that would serve nicely as a satellite SEC office …