SECU Blog from Abroad: Days 1 and 2 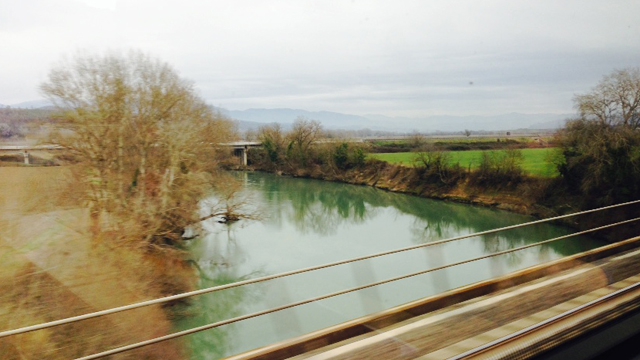 Somewhere between Rome and Torino, Italy, one view from a fast-moving train

In 2008, the SEC entered into a unique exchange agreement with the Politecnico di Torino in Italy to provide education abroad opportunities for SEC engineering students. To date, more than 115 students from SEC universities and the Politecnico have participated.

This week, SECU is in Torino, Italy, with members of the Auburn University Education Abroad office and the Samuel Ginn College of Engineering to see the Politecnico campus, meet with program administrators and to tour laboratories and off-campus study sites. (We will also visit education abroad centers run by Auburn and the University of Arkansas near Rome.)

But, first, we had to get here.

We flew out of Atlanta, Georgia, at 3:30 p.m. central time on Saturday, January 17 and arrived in Rome, nine hours later … as scheduled thanks to Delta Airlines … at 8 a.m. Rome time on Sunday, January 18 (seven-hour time difference). We took a cab to Rome’s Termini train station, waited for four hours (managed not to fall asleep in our espressos) and were on our way to Torino. The four-and-a-half hour train trip with four stops along the way went smoothly and saw everyone in our delegation taking the nap that had alluded him or her on the plane. After a 10-minute walk in the brisk, Northern Italy late afternoon air, we were at the hotel by 5:30 p.m.

There was little time to get acclimated though as we were expected at the home of the exchange program’s Italian director for dinner at 7 p.m. Thankfully, Professor Donato Firrao understood our fading energy, as he makes this trip himself several times a year, and encouraged us to return to the hotel shortly after dinner concluded.

“Try to rest,” he said looking at his watch and counting back the seven hours in his head. “Don’t you feel like it’s 3 p.m?