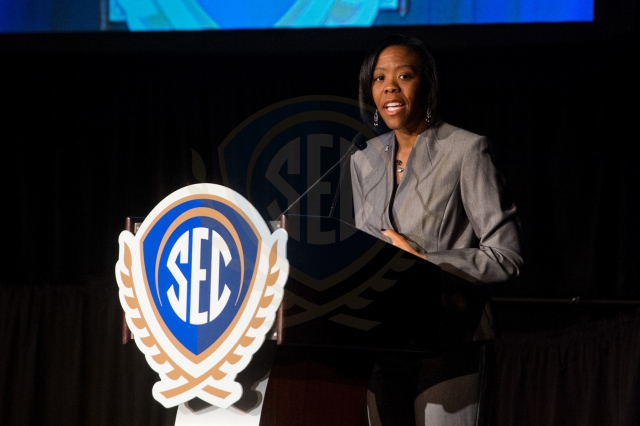 ATLANTA – The inaugural Southeastern Conference Symposium, entitled “Impact of the Southeast in the World’s Renewable Energy Future,” will take place this Sunday through Tuesday at the Hyatt Regency Atlanta.

Torie Johnson is the Executive Director of SECU, the academic initiative of the SEC, and she is responsible for the SEC Symposium. She sat down with SECSymposium.com on Sunday to discuss the behind-the-scenes aspects of the event and to offer perspective on the conference’s academic pursuits.

SECSymposium.com: When did the planning process for the SEC Symposium begin and how did the preparation unfold in advance of the event?

Torie Johnson: “Officially, the planning process began shortly after the topic was selected in May 2011, but because of the transition of SECU to the SEC office, earnest preparation didn’t happen until October of 2011. We started with the local organizing committee focusing on the program and determining how the event would be structured: Would there be breakouts? Would the Symposium follow a lecture format? The next phase tried to answer the question, who would we invite to present at the Symposium? That was an involved process because we wanted to make sure each university was represented and that speakers were incorporated into the most appropriate sessions. In the meantime, we were finding a location and creating a website (www.SECSymposium.com).

SECSymposium.com: As you prepare to put on the SEC Symposium, what are the most important expectations for you to meet with the very first event?

Torie Johnson: “It is very important to us, from a Conference perspective, to put on an event that, at minimum, meets the expectations of our participants. The faculty and administrators of our schools participate in events like this often. This is our first one, but they are familiar with academic conferences and we want to meet, and hopefully exceed, those expectations. We also want to be true to the vision of our Presidents and Chancellors, which is to showcase and remind people that there is more to the SEC than athletic programs.”

SECSymposium.com: Why was Atlanta selected as the site for the inaugural SEC Symposium and do you expect the event to stay in Atlanta in future years?

Torie Johnson: “Atlanta was an obvious first choice for a lot of reasons. The SEC has a strong relationship with the city because of the athletic events hosted here, so there was a level of comfort with our administration and staff. It is also a destination city and we wanted to easily bring in participants and presenters from all over the country. Whether or not the Symposium stays in Atlanta in the future, I am not sure. Atlanta certainly has a lot to offer, and at the same time, we understand there may be value in hosting the SEC Symposium in other cities.

SECSymposium.com: What was the process for selecting the topic for the SEC Symposium?

Torie Johnson: The Symposium is meant to be a cross-Conference event. The SEC Provosts created a mechanism for topic selection framed around each university having the opportunity to develop a proposal, but only doing so with other SEC universities. From the proposals offered, the Provosts select a topic that is recommended to the SEC Presidents and Chancellors for approval.

SECSymposium.com: Prior to being named Executive Director of SECU, you served the SEC most recently as an Assistant Director of Championships. How similar or different has planning for this event been to preparing for an SEC Championship event?

Torie Johnson: “For me, it has been nothing like preparing for an SEC Championship, primarily because when I worked in a more traditional Conference position, my role was to support the event, at the guidance of the event director. Now, I am the event director, and nothing can really prepare you for that position. However, the skills I learned have been transferable in preparing for the SEC Symposium. For example, I learned how to work with hotels, about marketing and audio/visual production. The general knowledge and experience has transferred to my current role, but nothing has been exactly the same.”

SECSymposium.com: How unique is an event like the SEC Symposium and how innovative is it for the SEC to be involved?

Torie Johnson: “In my opinion, the Southeastern Conference has taken a bit of a risk with the SEC Symposium specifically and the SECU academic initiative generally. We are unaware of any other sports conference ever being this hands on, this direct, or this aggressive with something that has nothing to do with sports. We don’t know how it will be perceived or if it will be understood fully by internal or external constituents. It is a highly unusual thing for the SEC to do, but I think the Conference might be on to something. When you step back and look at the whole picture of intercollegiate athletics, why wouldn’t a conference be engaged in the academic endeavors of its institutions? I don’t know that anyone has ever asked that question.”