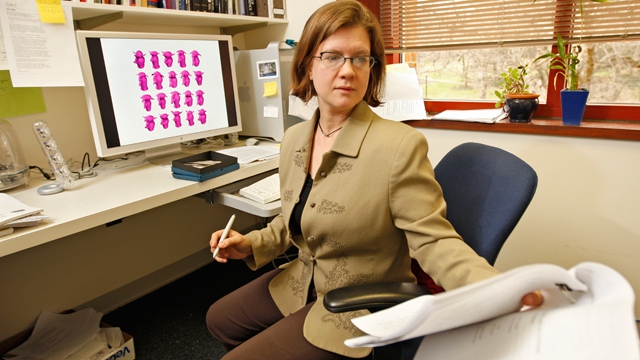 Dr. Isabel Gauthier, the 2015 SEC Professor of the Year, is one of the nation's leading experts in visual object recognition

SANDESTIN, Fla. – From a very early age, Dr. Isabel Gauthier has had a natural curiosity. Her inquisitiveness, along with a dedication to excellence in teaching and research, has led Gauthier, the David K. Wilson Chair of Psychology and Professor of Radiology and Radiological Sciences at Vanderbilt University, to a distinguished career in psychology and neuroscience.

On Thursday at the Southeastern Conference Spring Meetings, Gauthier will be recognized as the 2015 SEC Professor of the Year. The honor is bestowed annually on one SEC faculty member whose record of teaching, research and scholarship places him or her among the elite in higher education.

“I am thrilled both by the idea of the SEC Professor of the Year program and by the fact that I won,” Gauthier said by telephone from her office on Tuesday. “I am humbled because there are clearly a lot of great people in research and teaching in the entire SEC.”

Gauthier has become one of the nation’s leading experts in visual object recognition, but her entry into the field happened largely by what she describes as a “series of accidents.” Always intrigued by science, Gauthier thought she wanted to pursue a career in physics, but when she was matched with a physicist in a high school mentoring program, she realized the study of human behavior was more interesting to her.

“There was a program at my high school that matched you up with a real physicist to talk to you about his career,” Gauthier said. “The man was really, really smart and interesting, but he wasn’t into people. I realized maybe I wanted to do research about people to stay in touch a bit.”

A native of Montreal, Quebec, Gauthier earned her Ph.D. from Yale University in 1998. Shortly after leaving Yale, she found a home at Vanderbilt University, which at the time was beginning to make significant commitments in the area of brain imaging.

“When people in academia look for their first jobs, they realize that their areas are specialized so much that not a lot of places are a good match,” Gauthier said. “Vanderbilt had just bought a new brain imaging scanner and was looking for people to use it. They hired seven of us in different areas of psychology at that time.”

In her research, Gauthier studies object and facial recognition. Specifically, she observes how behavior skills, brain activity and the organization of the visual system change when people become experts in any domain.

“Most of us learn to read and that includes a kind of visual expertise to recognize letters,” Gauthier said. “If you think about most of us in our hobbies or our work, some people become dog experts and others avid birders. Some people know a lot about cars. What we’ve discovered is that all these different skills have some things in common. Many rely on the same systems in the brain for facial recognition.”

Contrary to some notions in popular culture that anyone can become an expert in an area with enough practice and preparation, Gauthier states that natural differences among people affect their perception and potential.

“People assume that if you’re looking at a dog or a car or a tree that we all get the same information in our visual systems. The reality is that’s not true at all,” she said. “There are large differences in recognizing objects. There are innate differences, but experience also has a huge effect. It is not really the case that everybody can learn to become as good as an expert.”

In addition to her research success, Gauthier also embraces her classroom instruction. She teaches an introductory psychology course each semester and enjoys the opportunity to introduce freshmen undergraduate students to the field about which she is most passionate.

“For many of our students, it is going to be one of their first big classes in college,” Gauthier said. “It is a challenge to teach because psychology is very broad and only a little bit of it do I know very well as a researcher. It is really fun to give this one big menu to students and get to meet with each of them to develop their own unique set of interests.”

Gauthier most enjoys working with her graduate students and watching them grow throughout their careers, while developing as professionals within the field.

“It’s a long process – we bring in these people who are really smart and are hand-picked, yet they feel like they know nothing yet,” Gauthier said. “They gain a lot of independence and it forces them to think about new questions. They start arguing with you about things and that’s the stage I really enjoy. They’re becoming the expert on something.”

While Gauthier is honored by the recognition she has received as the SEC Professor of the Year, she most hopes that that distinction brings awareness to research involving vision, perception and the learning process.

“Maybe compared to some other nominees, I am doing primarily basic research; we’re not trying to cure a disease or figure out how to train people,” she said. “I hope that my getting this award will get people interested in the kind of research that I’m doing. There are big, fundamental questions about who we are and how the brain is organized, and we won’t be able to answer those questions if we don’t do this basic research.”