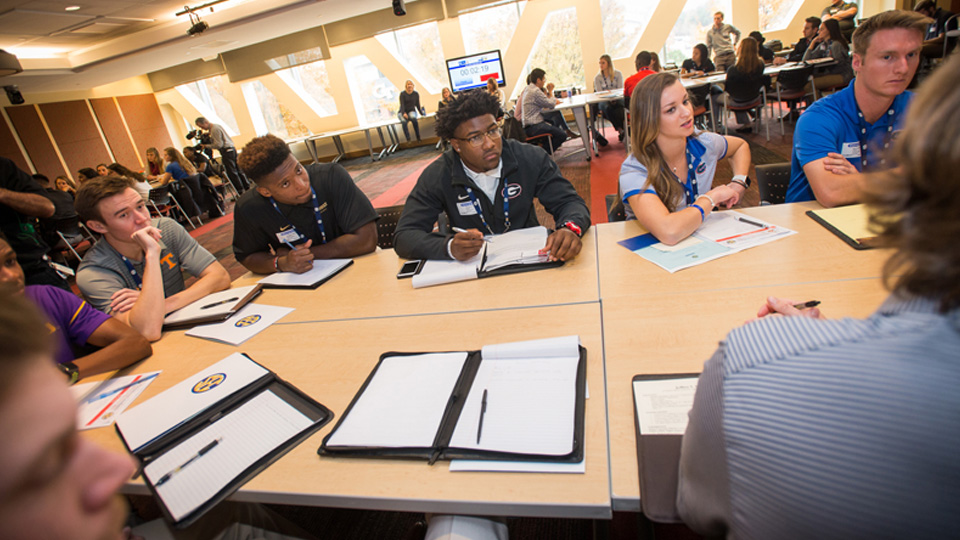 Current and former SEC student-athletes visited the headquarters and meet with executives and talent acquisition staff at several corporations in the Atlanta area.

Twenty-eight current and former Southeastern Conference student-athletes participated in the SEC Career Tour in Atlanta Nov. 28-30. This marked the second consecutive year the Conference has invited student-athletes from each of its institutions to participate in the career tour leading up to the SEC Football Championship Game.

The group visited the headquarters and meet with executives and talent acquisition staff at several corporations in the Atlanta area including Turner Broadcasting System, Mercedes-Benz Corporate, the Atlanta Braves organization and Delta Airlines. The group also listened to presentations by former Arkansas football player and co-founder and CEO of the MULTIPLi Global Josh Foliart, Randy Hain, founder and president of Serviam Partners, and former Auburn swimmer Beatriz Travalon.

“The SEC Career Tour has been such a rewarding experience the past two years,” said Ole Miss softball student-athlete Alex Schneider. “Not only has it provided irreplaceable networking opportunities for us as student-athletes, but also allowed us to pick the brains of top executives. This tour has opened my eyes to several great companies and careers I had never thought of. A huge thank you to the SEC for investing in my collegiate career as well as my future career.”

Also included on the agenda was a dinner with SEC Commissioner Greg Sankey, an outing at Top Golf, and a visit with children at the Boys & Girls Club of America. The goal of the career tour is to provide exposure for SEC student-athletes who are seeking career opportunities in various fields.

Said Knox Auerbach of the Alabama men’s swimming and diving team: “It was a great experience learning more about what I want to do as I get closer to graduation.”