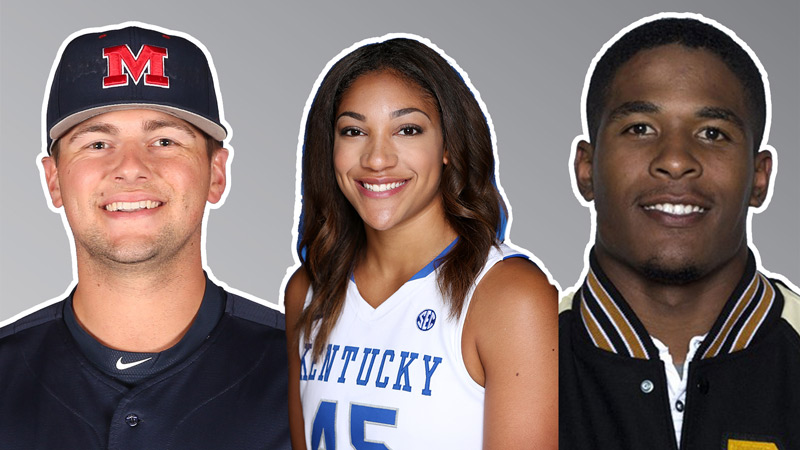 BIRMINGHAM, Ala. – Brady Bramlett, a former member of the Ole Miss baseball team; Brandon Lee, a member of the Missouri football team; and Alyssa Rice, a member of the Kentucky women’s basketball team, will represent the Southeastern Conference on proposed governance rule changes under the NCAA’s Division I autonomy process at the NCAA Convention in Indianapolis this week.

The three student-athletes will represent the SEC as part of the Autonomy Conferences’ (ACC, Big Ten, Big 12, Pac 12, SEC) efforts to engage and empower student-athletes by giving them both a voice and vote within a transparent decision-making process.

“Conference student-athlete representation is a central part of the autonomy process of the NCAA governance structure and we are pleased that Brady, Brandon and Alyssa will join us in Indianapolis next week as representatives of the SEC,” said SEC Commissioner Greg Sankey. “SEC student-athletes have been active in expressing their views on issues important to their intercollegiate athletics experience. At the NCAA Convention, these three students have the opportunity to have their voices heard in a national forum.”

The autonomy governance model grants flexibility to schools in the Atlantic Coast, Big 12, Big Ten, Pac 12 and Southeastern conferences to change specified rules within Division I. The legislative process for these 65 schools includes three student-athlete representatives from each conference who will vote on rule changes. Voting on autonomy issues includes 15 total student-athletes (three from each of the Autonomy Conferences) who, collectively, will cast votes in greater number than four of the five Autonomy Conferences.

Bramlett, from Bartlett, Tenn., was a starting pitcher for Ole Miss for two seasons before choosing to end his baseball career despite being drafted in the 13th round of the Major League Baseball draft by the Boston Red Sox. Bramlett is pursuing a master’s degree in integrated marketing communications and is focused on pursuing a career in college athletics administration. Bramlett also serves as the Co-Chair of the NCAA Division I National Student-Athlete Advisory Committee and as a student-athlete representative on the Division I Board of Directors. He is a past representative on the NCAA Strategic Vision and Planning Committee, a subcommittee of the NCAA Division I Council, and formerly served on the NCAA Minority Opportunities and Interests Committee.

Lee, a junior last fall from Indianapolis, played in all 13 games and started nine for Missouri in 2017, posting a career-high 42 tackles and five tackles for loss. He made one of the biggest plays of the season for the Tiger defense when he returned an interception 42 yards for a touchdown in a win at Vanderbilt. He closed the season with a five-tackle performance in the Texas Bowl, helping lead Missouri to seven wins and its first bowl game since 2014. A major in personal financing planning, Lee is active in community service, volunteering at National Student-Athlete Day with the Special Olympics of Mid-Missouri, the Central Missouri Food Bank, Safe Kids Day and Big Brothers/Big Sisters Football Camp while also paying visits to veterans at the VA Hospital and patients at Women’s and Children’s Hospital.

Rice, a senior from Reynoldsburg, Ohio, serves as chair of the SEC Women’s Basketball Leadership Council. She represented the Southeastern Conference at the NCAA Autonomy 5 meeting held in Chicago in April. Rice was one of five District II honorees to the College Sports Information Directors of America Academic All-District Team, and she is a member of the SEC Academic Honor Roll. She played in 33 games last season with 30 starts and averaged 4.2 points a game, 4.5 rebounds a game and finished second on the team with 22 blocks. In the current season, she has played and started in every game and is averaging a career-best 7.9 points per game and 7.2 rebounds per game while leading the team in blocked shots.

The NCAA Convention in Indianapolis will be the third for Bramlett to serve as an SEC student-athlete voting member and the first for Lee and Rice.