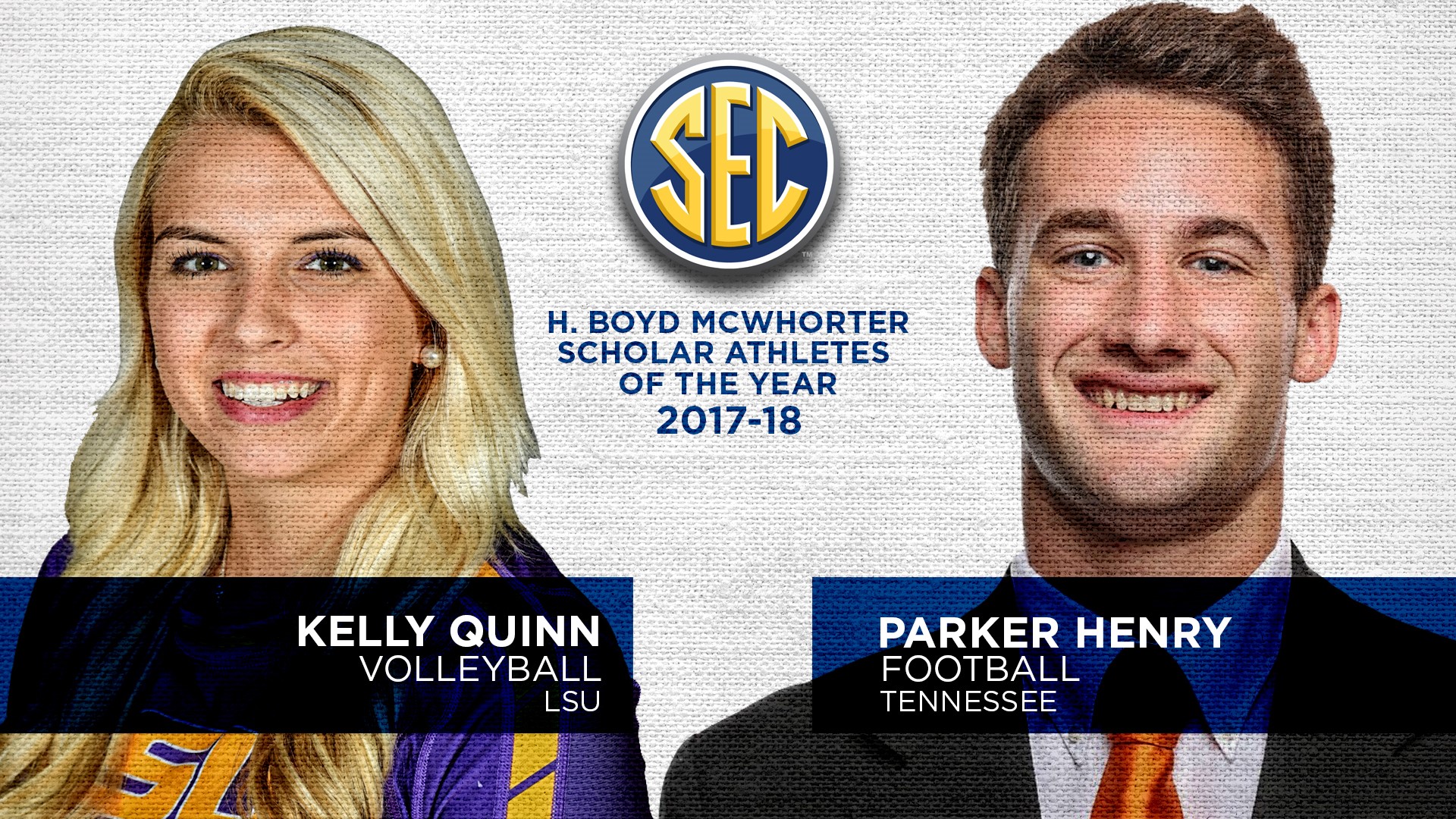 The two were chosen by a committee of Faculty Athletics Representatives from SEC universities and each will receive a $20,000 post-graduate scholarship, provided by AT&T, an SEC official sponsor.  Henry and Quinn will be honored at the annual SEC Awards Dinner during the SEC Spring Meetings in Sandestin, Fla., the last week of May.

“Kelly and Parker are outstanding representatives of student-athletes from across the SEC. They made a commitment to the total student-athlete experience, which resulted in their excellence in competition and in the classroom,” Sankey said.  “The H. Boyd McWhorter Award is the highest honor earned by a student-athlete in the SEC and I congratulate Kelly and Parker along with their families and universities on their many achievements.”

Henry, a Finance and Political Science double major with a 4.0 grade point average at Tennessee, earned second team CoSIDA Academic All-American honors in 2017 and is a three-time Academic All-District selection.  A three-time selection to the SEC Academic Honor Roll, Henry is only the sixth Tennessee football player ever to earn an NCAA Postgraduate Scholarship and the second Volunteer football player to earn Academic All-District honors in back-to-back years since Peyton Manning in 1996 and 1997.

Henry started 24 games as Tennessee’s primary holder during the 2016 and 2017 seasons, joining the Volunteer football team as a walk on in 2015 after serving as an equipment manager.  He was part of 22 victories including two bowl wins as he never missed a hold.  He helped placekicker Aaron Medley make 17 field goals in 2016-17 and true freshman Brent Cimaglia drill five field goals of 40+ yards in 2017.

Henry was awarded the University of Tennessee Medallion for Community Service for having over 100 hours of community service.  His service projects included volunteering with Habitat for Humanity from 2015-17 and he led underprivileged middle school kids for a two-day weekend at Sevier Heights Baptist Church every February.

Quinn, who is majoring in Biology and Kinesiology/Pre-Med, has maintained a 4.063 cumulative grade point average and will graduate with two degrees in May.  A two-time member of the SEC Academic Honor Roll, she attended medical school interviews during the fall of 2017 while competing on the volleyball team.

She helped LSU reach its first NCAA Tournament appearance since the 2014 season, serving as a solid defensive specialist for the Tigers while paying in 322 sets of 105 matches in her career.  She helped lead the Tigers to two NCAA appearances in her four years at LSU, playing in every set in postseason.  She totaled 301 digs at 2.98 per set in her junior year which was second on the team.  She finished her career with a total of 522 digs at 1.62 digs per set to go along with 36 service aces and she did not have a reception error in 55 sets played as a freshman.

A member of the 2016 SEC Service Community Team, Quinn served as LSU’s volleyball SAAC representative and served in a SAAC leadership position while being involved in many community service activities in her four years.