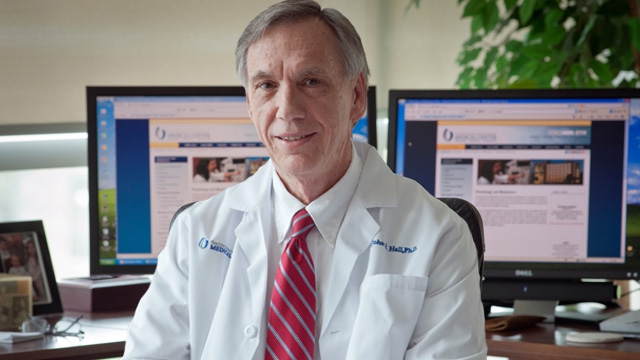 Dr. John Hall from the University of Mississippi is the 2014 SEC Professor of the Year

DESTIN, Fla. – Things have not turned out quite as planned for Dr. John E. Hall, the Arthur C. Guyton Professor and Chair of Physiology and Biophysics at the University of Mississippi. But, for the 2014 Southeastern Conference Professor of the Year, it has been the unexpected twists and turns in his life that have defined his successes.

Hall, who also is the Director of the Mississippi Center for Obesity Research at the University of Mississippi Medical Center (UMMC), is a leader in the areas of cardiovascular and renal physiology. His work has been funded by the National Heart, Lung and Blood Institute since 1975, which are all a lifetime away from Dr. Hall’s original career choice.

Hall began as an English and journalism major at Kent State University in the mid-1960s with aspirations of becoming a high school teacher, but a meeting with Dr. Keith L. Ewing, Assistant Chairman of Biological Sciences at Kent State, changed the course of his life.

“I switched into the area of physiology as an undergraduate, mainly on the basis of a really good mentor and a really good teacher,” Hall said. “I’ve had good mentors all the way through my career and the key message that I tell our students is that good mentors make a big impact on how you pursue your career.”

After earning his Ph.D. in Physiology at Michigan State in 1974, Hall moved south to Mississippi to become a post-doctoral fellow at the UMMC to study under Dr. Arthur Guyton, who was world-renowned in the area of cardiovascular physiology. He expected it to be a short stay, but it became a place at which he has made his home for nearly 40 years.

“I came to Mississippi largely on the basis of the tremendous program in cardiovascular medicine led by Dr. Arthur Guyton,” Hall said. “I planned to come here only for two years to study under him, but there was a tremendous opportunity for me at the medical center because of the great program he established in the 1950s and 1960s.”

Hall has been a prolific author in the area of physiology, penning more than 530 publications and being cited more than 35,800 times. His Textbook of Medical Physiology is considered the leading medical physiology textbook and has been translated in 14 languages.

“I developed an interest in the impact of obesity on health because we realized this was the driving force for most of the hypertension and cardiovascular disease we were seeing in patients,” Hall said. “The work we are doing now focuses on two major areas. First, what are the risk factors of obesity and why is it so hard to lose weight? Secondly, how does obesity lead to cardiovascular disease and kidney research?”

“Obesity is the driver for many chronic diseases that affect the population in the Southeast and, specifically, in Mississippi,” Hall said. “We see obesity as the greatest challenge to our health care system, particularly in the Southeast. It is a major risk factor for cancer, liver disease and many other diseases, and that is a major focus in our medical center, both in our research efforts and in our clinical care.”

The second -annual SEC Symposium, which is scheduled to take place September 21-23 at the Hyatt Regency Atlanta, is entitled Prevention of Obesity: Overcoming a 21st Century Public Health Challenge. Hall, who will be a special guest, considers the topic to be a perfect focus for an academic conference designed to address a scholarly topic of interest all 14 Southeastern Conference institutions.

“It’s really appropriate that the SEC host this symposium on obesity, which accounts for tremendous cost, not only economic cost, but to the health of the population in the Southeast,” Hall said. “I’ve been invited to come and give remarks at that symposium and I think it’s great.”

During his early days at the UMMC, Hall worked alongside Dr. Dan Jones, now the Ole Miss Chancellor, and the person who nominated him for the SEC Professor of the Year distinction. Jones understands and appreciates the impact Hall has made in both h is field of research and as a professor.

“Dr. John Hall represents what is best about academic leadership in the Southeastern Conference,” Jones said. “His reputation as an educator spans the globe and his contributions in the broad fields of medicine and physiology are substantial. He exemplifies the ideals we should all have for an SEC Professor of the Year.”

Though his research may be the most renowned aspect of Hall’s career, he has always – at the core – desired to be an educator. In his time at Ole Miss, Hall has mentored more than 120 postdoctoral fellows, graduate students and medical student researchers. Six of those students have become chairs or directors of various departments.

“My goal for teaching is to help students develop as lifelong learners,” Hall said. “I tell our students that my job is not to teach them, but to help them learn. Most students learn much more from me, not so much on material, but on the general philosophy of being lifelong learners. That’s been a major focus – to help develop those skills. It is a great privilege when I see those students be successful.”