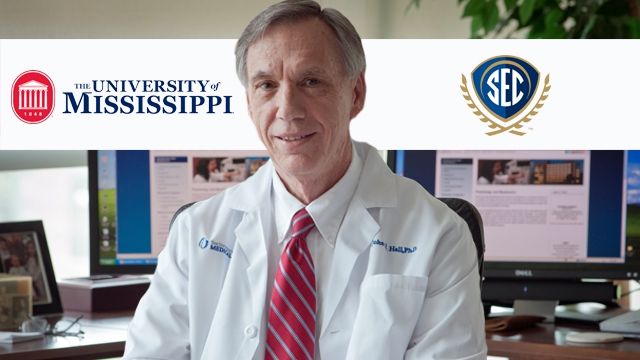 2014 SEC Professor of the Year Nominees and Winner

BIRMINGHAM, Ala. – The Southeastern Conference announced Wednesday its 2014 SEC Professor of the Year, Dr. John E. Hall, the Arthur C. Guyton Professor and Chair of Physiology and Biophysics at the University of Mississippi.

Hall, who is also the Director of the Mississippi Center for Obesity Research at the University of Mississippi Medical Center (UMMC), is one of the most recognized teachers and researchers in the areas of cardiovascular and renal physiology, mechanisms of hypertension, obesity and metabolic disorders. His research has been funded by the National Heart, Lung and Blood Institute since 1975. Hall has also been the Director of a National Institute of Health Program Project since 1988.

“Dr. John Hall represents what is best about academic leadership in the Southeastern Conference,” said Dr. Dan Jones, Chancellor at the University of Mississippi. “His reputation as an educator spans the globe and his contributions in the broad fields of medicine and physiology are substantial. He exemplifies the ideals we should all have for an SEC Professor of the Year.”

In his time at Ole Miss, Hall has mentored more than 120 postdoctoral fellows, graduate students and medical student researchers. Six of his students have become chairs or directors of various departments. In 2005, Hall was nominated, by his students, as an “All Star Professor.” He has also been inducted into the Norman C. Nelson Order for Teaching Excellence at UMMC.

“Dr. Hall is part of a lineage that includes some of the finest scientists this country has produced,” said Dr. James Keeton, Vice Chancellor for Health Affairs and Dean of the School of Medicine at the UM Medical Center. “He is the product of a department that has nurtured many leaders in the field of physiology and, in turn, his leadership has fostered the development of the next generation of exemplary scientists. There’s no greater legacy than that, and no person more deserving of this honor.”

Dr. Hall has authored more than 530 publications and has been cited more than 35,800 times. His Textbook of Medical Physiology, considered the leading medical physiology textbook, is translated in 14 languages, and is one of 18 books he has written or edited.

“The University of Mississippi and its medical center have a treasure in Dr. John Hall,” said Dr. Jay Gogue, President of Auburn University and President of the Southeastern Conference. “He has made significant contributions as a researcher and mentor, and I offer him my sincerest congratulations.”

The SEC Professor of the Year Award is given annually to one SEC faculty member whose record in research and scholarship places him or her among the elite in higher education. Winners are selected from the university’s SEC Faculty Achievement Awards. In recognition of the honor, the SEC will provide Dr. Hall with a $20,000 honorarium and recognize him at the SEC Spring Meetings in May.

“Dr. John Hall epitomizes academic excellence as an instructor, researcher and scholar,” said SEC Commissioner Mike Slive. “We are pleased to celebrate his achievements as the 2014 SEC Professor of the Year and thank him for working tirelessly for and with our students.”

Selected by a committee of SEC Provosts, the SEC Professor of the Year Award is part of SECU, the academic initiative of the Southeastern Conference, which sponsors, supports and promotes collaborative higher education programs and activities involving administrators, faculty and students at its 14 member universities.

Using its SECU academic initiative, the Southeastern Conference sponsors, supports and promotes collaborative higher education programs and activities involving administrators, faculty and students at its fourteen member universities. The goals of the SECU initiative include highlighting the endeavors and achievements of SEC faculty and universities; advancing the merit and reputation of SEC universities outside of the traditional SEC region; identifying and preparing future leaders for high-level service in academia; increasing the amount and type of education abroad opportunities available to SEC students; and providing opportunities for collaboration among SEC university personnel.