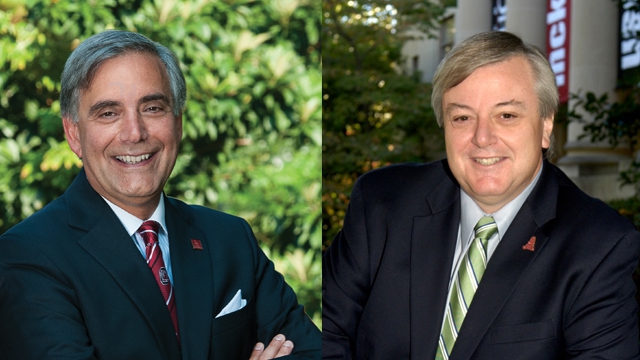 University of South Carolina President Dr. Harris Pastides and Executive Vice President for Academic Affairs and Provost Dr. Michael Amiridis will speak during the SEC Presidents, Chancellors and Provosts Reception on the second day of the 2014 Southeastern Conference Symposium, to be held September 21-23 at the Hyatt Regency Atlanta.

Designed to address a significant scholarly issue by utilizing the range of disciplinary strengths of the SEC’s 14 member universities, the 2014 SEC Symposium is entitled Prevention of Obesity: Overcoming a 21st Century Public Health Challenge and is led by the University of South Carolina.

As the lead institution for the SEC Symposium, South Carolina faculty and administrators were charged with organizing the event’s program, which this year will critically review the body of knowledge that could guide the development and implementation of a national effort to reduce the obese population.

“Dr. Pastides and Dr. Amiridis have provided consistent leadership throughout the planning process for the second SEC Symposium,” said Torie Johnson, Executive Director of SECU. “Their willingness to participate in the event’s reception is another example of their commitment to the success of the event and their belief in the SEC’s academic initiative.”

Pastides has been President at the University of South Carolina since 2008. He joined USC in 1998 as Dean of the School of Public Health and later served as the Vice President for Research and Health Sciences. He is a nationally respected and widely published scholar in the fields of health promotion, disease prevention, health disparities and public health preparedness. He is also active in the NCAA. Currently, Dr. Pastides is the SEC’s representative on the NCAA Executive Committee; the NCAA Division I Board of Directors; and the NCAA Division I Steering Committee on Governance.

Provost Amiridis is responsible for leading the formulation and implementation of the academic policy at USC; supervising the allocation of resources in all academic and academic support areas; and representing the University before external bodies.

The keynote speakers for the 2014 SEC Symposium, as previously announced, are Nancy Brown, Chief Executive Officer of the American Heart Association, and Dr. Michael Lauer, Director of the Division of Cardiovascular Sciences at the National Heart, Lung, and Blood Institute. SEC Commissioner Mike Slive and Dr. John E. Hall, 2014 SEC Professor of the Year, will also speak during the Symposium.