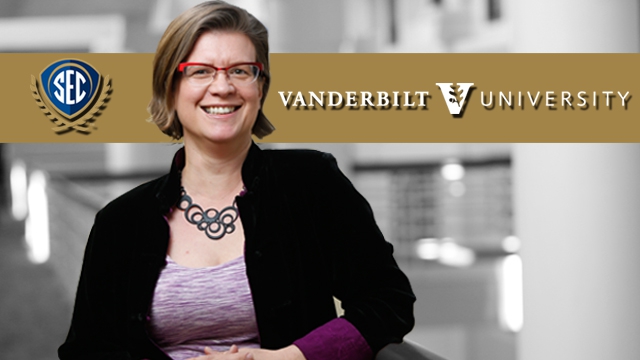 Dr. Isabel Gauthier from Vanderbilt University was named the 2015 SEC Professor of the Year on Wednesday

BIRMINGHAM, Ala. – Dr. Isabel Gauthier, the David K. Wilson Chair of Psychology and Professor of Radiology and Radiological Sciences at Vanderbilt University, has been named the 2015 SEC Professor of the Year, the SEC announced on Wednesday.

Dr. Gauthier’s work focuses on visual object recognition, and she uses a variety of techniques to understand how people detect and identify objects rapidly and effectively. Her dissertation was the first to demonstrate that the behavioral and neural underpinnings of perceptual expertise could be studied in the laboratory using short term training protocols. And, she recently expanded her research to include symbolic objects, like musical notes and alphanumeric characters.

She teaches undergraduate courses in introductory psychology as well as research methods in psychology, and she has mentored several students in honors projects, receiving an excellence in mentoring award.

“Dr. Isabel Gauthier is a teacher, researcher and mentor who embodies the most desirable qualities we seek in the professoriate,” said Nicholas S. Zeppos, Chancellor of Vanderbilt University. “She has engaged in high-quality, high-impact research and attained an international reputation for her expertise in object recognition. Her work at Vanderbilt has been exemplary, and she has distinguished herself as one of the most sought-after professors for Vanderbilt students of all levels. I am thrilled she has been named the 2015 SEC Professor of the Year.”

In 2000, Dr. Gauthier founded the Perceptual Expertise Network (PEN), a group of cognitive neuroscientists that offers a new model of interdisciplinary collaboration centered on graduate student and post-doctoral fellow participation. Her research has been funded by the National Institutes of Health (NIH), the National Science Foundation (NSF) and the James S. McDonnell Foundation.

Dr. Gauthier received the American Psychological Association (APA) Distinguished Scientific Award for Early Career Contribution to Psychology in the area of Behavioral/Cognitive Neuroscience in 2003. She was elected Fellow of the Association for Psychological Science in 2010 and Fellow of the Society of Experimental Psychologists in 2012. In 2014, she received the Chancellor’s Award for Research from Vanderbilt University.

“The SEC is pleased to bestow the 2015 SEC Professor of the Year award on Dr. Isabel Gauthier,” said SEC Commissioner Mike Slive. “Her commitment to her students, to her research and to her field are virtually unmatched, and I congratulate Dr. Gauthier on this tremendous honor.”

In recognition of the honor, the SEC will provide Dr. Gauthier with a $20,000 honorarium and she will be recognized at the SEC Awards Dinner in May.

The SEC Professor of the Year Award is given annually to one SEC faculty member whose record of teaching, research and scholarship places him or her among the elite in higher education. Winners are selected by the SEC Provosts from among the 14 SEC Faculty Achievement Award recipients.

The SEC Faculty Achievement and SEC Professor of the Year Awards are administered by SECU, the academic initiative of the Southeastern Conference. Through SECU, the SEC sponsors, supports and promotes collaborative higher education programs and activities involving administrators, faculty and students at its 14 member universities.